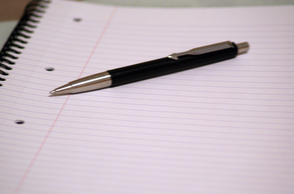 Twenty-one of the twenty-two students in Benjamin Hubert's classroom picked up their pens and began to write.
This moment always had the same effect on Benjamin, he felt his lips curl into a smile.
He knew he was good. But ...this?
This was excellent.

Every time I looked down, I saw my nemesis staring back.

I'd never really had an enemy, especially had I never been enemies with a blank sheet of paper.

But, that day in Mr. Hubert's class, fifty different thesis statements hyperactively played tag in my head, running into each other, a tangled mess of words upon words.... I couldn't even separate one sentence from another.

The one clear thought I had was "what if..."

I wasn't sure how to tell my parents I had no interest in becoming the first nuclear physicist in our family.
They'd be hurt.
They would ask why.
I'd be forced to tell them my deepest and darkest secret....

I had over two million subscribers who posted things like,
"dude! you should so be on tv!";  "haha! you're hilarious!"; and "get off the internet- you don't deserve to be here!"

That last comment came along every two weeks or so, same subscriber, a weirdo who went by the name @nachomanpowerandspam...but I learned to take it as a compliment. After doing a little bit of stalking (or as I like to call it "research") on @nachomanpowerandspam I found that this person made the same comment to a video created by Zach Galifiankias. So, I learned to take the internet's way of handing you a compliment.

Having over two million people give you their attention on a weekly basis does wonders for one's self esteem, yes...but I still had no idea how to tell my innocent parents that their daughter had a secret identity as a... a comedian.

The blank sheet of paper stared at me accusingly.

I wanted to cry.

Looking up, I sighed and let my eyes wander to the window.
It was a beautiful day outside. I wished to be outside, as opposed to sitting cooped up in a classroom with the fate of soon being shipped off to a campus with even larger classrooms, thicker textbooks, and less laughter. I'd be surrounded by talk of physics from large brained nerds who, though lovable, wouldn't get any of my jokes...I'd be so sad. Like a frightened and lonely french fry flying solo in an order of onion rings, like a -

I jumped, startled, as I heard Mr. Hubert call my name.

Glancing at my teacher, I gulped,
"Yes sir?"

"See me after class for a moment, OK?"

He went back to staring into space, and I went back to avoiding eye contact with the blank sheet of paper in front of me.

The next twenty minutes of class were torture. I heard the pens and pencils of my classmates furiously marking up their once blank space of their papers while I sat in agony.

OK, I'm being dramatic. It was kind of peaceful, to, for once...not even try; but I did feel guilty.

My parents would kill me if I never wrote that paper and never got into college.

No, they wouldn't kill me, their disappointment was the thing that would really do me in.

I sighed and the bell rang.

Everyone around me gathered their things,

"Bye Amy, see you at lunch." The girl in front of me said.

"Bye, I might be a little late." I replied and glancing at Mr. Hubert, I reached for my backpack.

As the classroom cleared out, he nodded goodbye to some of the students and made his way towards my desk.

When everyone was gone, he looked at me with concern,
"What's going on? You're here, but you're not present."

I looked at Mr. Hubert's sky blue shirt, bright yellow suspenders, and gray dress pants. For not the first time, I considered the fact that this was an admirable and courageous man who stood before me. He was not afraid to be himself.

Then again, English teachers are almost never afraid to be themselves.

Glancing down, I noticed , that he also wore incredibly shiny black shoes.

This gave me a reason to smile and he, a bit uncertainly, mirrored my smile,
"Well, are you planning on answering my question...?" His voice trailed off.

Coming to my senses, I shook my head and replied,
"Sorry sir, I can't seem to think clearly today."

He nodded,
"We all have off days. For one reason or another." He moved to sit down in one of the desks, and as I watched him ease his large frame into the desk, I was surprised to see that he fit, " The thing about writing is there's always something to say. You just have to trust yourself and go with it."

"I mean..." Mr. Hubert paused to gather his thoughts,

"Don't try to write a thesis statement, don't try to make yourself sound like the best student for their college, don't try to impress anyone. Go to what's here." He pointed towards his chest, "Write what's here and you can fix it later. That is, if you even need to fix it."

"But don't they want to be impressed? If I don't give them my best, why would they want someone who doesn't care enough to try?" I asked, looking at his yellow suspenders.

"People don't want to be impressed, they want sincerity. Even if we don't realize it, that's what we all want-  honesty. With writing, you've got to be honest. Write from your he...actually, you know what?  I have an idea. Write as if you're writing to someone who you admire and can relate to. Tell them who you who are and who you want to be. Be honest with them and with yourself."

To both of our surprise, we suddenly heard a low roll of thunder and less than a second later, the pitter-patter of rainfall.

The sound of the rain was so loud you would have thought the window was open.

In that rainy moment, I felt the tiniest spark of hope ...

Maybe I could write this paper.

"OK." I nodded and reached for my pen.

As he stood and got a little bit stuck in the desk, I pretended not to notice. Once he'd managed to make it back on his feet, I looked up and saw him headed to the door,
"Take all the time you need, I'm going to the teacher's lounge."

Cracking my knuckles, I went to work on the greatest paper I'd ever written.

It began with three words,

It ended with my honesty.

As I scribbled the last line, followed by "Yours Truly, Amy Ling"  I knew that I would take the letter to my parents.

I knew they would read it and look at me with raised eyebrows as they asked,
"Whose Andy Samberg?"

I knew that I would then show them my blog.

Whether or not I ended up a comedian, it was important for me do this, because like Mr. Hubert said, even though we may not realize it, what each and every one of us want, is honesty.